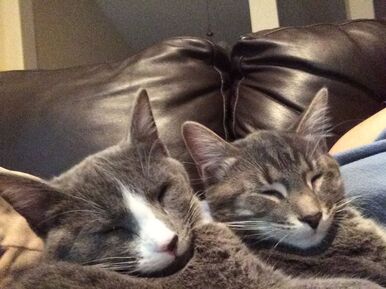 Second year has been fairly exciting for me. Starting in the summer before school started, I adopted two sister kittens, Misaki and Keiko. This was my first time having kittens since we adopted the cat we already had when he was about three or four years old. What made Misaki and Keiko special to me was that I assumed all responsibility for them, including all of the costs associated with pets (vet bills, food, medicine, litter, and other necessities). This has been a big, exciting step for me since this is the first time I am taking financial responsibility for other living beings. It has been a lot of fun raising two cats, especially when it comes to the cute toys for cats. The only major negatives so far is that I cannot leave any type of plastic bag because they have discovered that treats come in plastic zip lock bags and it turns out one of them can jump about four feet straight up into the air to reach the top of a three-shelf bookshelf 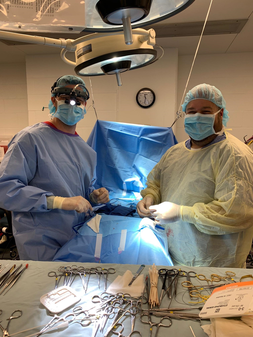 Unfortunately, about a month after school started in the fall, Harry, my first and last hedgehog passed away. I don't know if all hedgehogs do this, but all three of my hedgehogs refused to eat or drink for the week leading up to their deaths, which was not a pretty way to die as they were basically dehydrated skin and bones at the end. I was actually able to tell my mom that Harry was getting ready to die due to this sign. Then, about a week later, Molly had a sudden stroke or heart attack (we don't know for sure what it was, but we are pretty sure it was one of these being the cause of death) and died. It had been about four years since we had lost a dog, so it took awhile to adjust to losing her.

In terms of school, I took an Honors Seminar, Sticky Innovation, where a large part of it involved using the resources at UC's Innovation Hub. The part that really stuck with me is that for one of the projects, I actually designed in SolidWorks a frame for bees that would go into what we dubbed the beehouse (see the Sticky Innovation page under Experiences for more info). I took a SolidWorks class last spring so it was exciting to actually be using what I learned to make something new. The best part was that I actually got to 3D print the frame I created. It was my first time 3D printing anything, which is exciting since 3D printing is becoming a larger part in biomedical engineering and I was the one who designed the product being printed. The only downside to the class is that this is one of the first classes I have taken where the professors never gave any feedback on why they gave the grades they gave us. It would have been nice to have gotten some feedback since I ended up getting to use a lot of technologies I may use in the future in biomedical engineering.

The most exciting part of this year is that I did my first coop rotation at Cincinnati Children's Hospital in the Cardiothoracic Surgery department. I was excited about this position since I was told at the interviews that it would be about 40% animal surgeries and 60% data mining and other computer related work. I got to help with a bunch of animal surgeries on rabbits, pigs, and sheep where the purpose was trying to improve the cardiopulmonary bypass procedure or look at cardiomyocyte regeneration in juvenile pigs. I even got to be see and help a bit with a rat bypass surgery. I was told that it was one of the first ones done in the U.S. (it might have even possibly been the first rat bypass surgery in the U.S. The only other country the people in the lab could find out about were done in China).

One of the major incidences that occurred about 40% of the way into my coop was that my supervisor (who was also the one in charge of the animal surgery side of the lab) left. There was about a one week gap of not having anyone officially in charge of animal surgery (including where equipment was), so I ended up getting to step up and take the lead in set up and making sure all of the equipment was found. A replacement was found pretty quickly for my supervisor, and I ended up being the one who helped him learn about where the supplies were kept and setting up since the surgeon and the surgical resident did not really have much to do with that part of the surgeries. The image to the right shows the surgical research fellow and the new animal supervisor during the down time in a four hour long rabbit bypass surgery. I learned a lot about surgery during my coop which was interesting, though I still do not have any real interest in medical school. What I am interested in is that my old supervisor and the new animal supervisor both helped with the surgeries, being the second pair of hands to the surgeon performing the actual procedure. Neither one went to medical school yet they had learned/is learning how to essentially perform cardiothoracic surgery. This tells me that the surgical field is not limited to just doctors and surgeons which opens up a lot of new possibilities for what I may want to do.

In terms of the non animal side of the coop, I worked on a project using SPSS to analyze data from the UNOS and PHIS databases to see if and how strokes affect heart transplant outcomes. It was a lot of learning by doing, but I ended up learning how to use a new statistical analysis program in addition to being exposed to a side of research I was unaware of. A lot of the papers the lab publishes is statistically analyzing different factors that affect transplant outcomes. They do not generate any data on their own, using data from a national database. I was told that they publish a lot more papers than a lot of other labs do (I think they said they publish about 6-10 papers a year). When I left, I had just about finished up the stroke project. The head surgeon in charge of the lab said he was going to look at the data I found and ask some people about it. He said that he will then (hopefully) start actually turning the data into an actual manuscript that may be published this summer. If the manuscript is written, I may be able to have my name on an actual published paper which is exciting for me. I know the other software they use for the statistical analysis projects is R. This summer, I will be taking biostatistics where we are supposed to learn how to use R, so I am hoping that when I return to the lab in the fall, I might be able to use my newly acquired R knowledge on a new project.

Speaking of using software knowledge, I got to use my ImageJ knowledge from the RAMP lab I worked in last spring at the coop on a different project. It was sort of exciting for me because at the previous lab, there was a written protocol for exactly what to do, but for this project, I was on my own in figuring out how to go about measuring areas under arterial waveforms and converting areas in pixels to the actual units of mmHg*s which involved quite a bit of conversions. For this project, the two previous coop students started it and I made quite a bit of progress (including the conversion to the correct units which the other two were not sure how to do) on it. One of the two students is returning in the summer so she will continue it, and if there is still work to be done, I will get to continue when I return in the fall. The exciting part of this project is that animal experiments testing a device developed in Israel may begin using the results of this project. These experiments may begin this summer or in the fall depending on where we get on the waveform measurement part, but I think it will be neat to see how the work I have done will play a role in possibly how a device works.

In terms of next year, I am planning to return to the same lab in the fall at Children's for my second coop semester. I was also accepted into the ACCEND MS program so hopefully I will be able to start taking Graduate classes when I return in the spring.

*RaMP Update*
The project that I worked on in RaMP was published in May 2019. I was mentioned in the Acknowledgements section at the end. I have included the paper below.