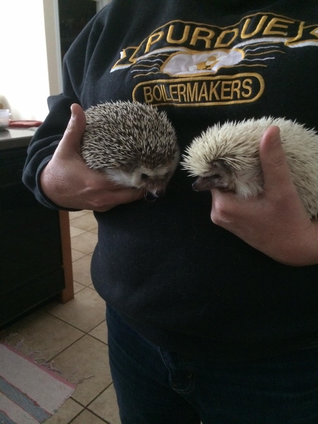 I have officially finished my first year of college. College was definitely different from high school from living in a dorm to a class schedule that is not the same each day. The major differences between high school and college was probably the sheer amount of freedom I had each day and how much walking is involved to go from place to place on campus.

​In terms of experiences that have had an impact on my personal trajectory, I think the largest change had to do with living on campus and being away from home. I did not enjoy being away from my family, and I ended up coming home about half of the week. One of the main reasons why I did not enjoy living on campus was that I was away from all of my pets. What made the separation worse was that early into the first semester, one of my hedgehogs, Lyriss, stopped eating and became unbalanced on her feet. I hoped it was due to a large growth on one of her feet, but after going to the vet, one of my fears was confirmed: Lyriss had a degenerative neurological disorder (most likely Wobbly Hedgehog Syndrome).

Over the first three months of my first semester, I kept trying to come home as often as I could to take care of Lyriss and just try to be with her as she became weaker and skinnier. For a little while, it seemed like she was not getting any worse, but then she would not really eat or drink without me making her. I was only able to see her a few nights a week, so a few days would go by before I saw her again. Mid-November, I had her out for a little bit during the night. I was able to get her to eat a few bites of food, but she seemed skinnier at that point. The next morning, I found her out in the open in her cage. I wasn't too worried about that until I put my hand under her and lifted her up. She had died at some point during the night. I was devastated.

Flash-forward to late-March, four months later, when I found an infection around another one of my hedgehog's underside. The infection interfered with the excretions of the hedgehog, whose name was Burnie, and it looked like it was painful for him to walk. I took him to the vet where he was prescribed medicine given to him over two weeks. The infection cleared up almost completely, and I did not think the infection was that serious. Between classes and research, I spent more time during the week on campus rather than come home as often as I did with Lyriss since Burnie's condition seemed to be improving, but on the second weekend I was home since noticing the rash, I noticed that Burnie had not been eating as much and had not been running. He had become thinner, and he was dehydrated. That weekend was the first weekend of spring break, so I hoped to spend as much time as I could with him. The first Saturday of spring break, I took him out of his cage to give him his last dose of medicine, and he seemed to be fine, fighting off the syringe as he normally did. I decided to set him in a blanket on my lap while I read in bed. Around 30-45 minutes later, something felt off to me. I had a bad feeling but I pushed it aside because I really did not want to believe it. I unfurled the blanket a bit to find that Burnie had died. It was terrible the second time around as well.

​I think my experiences with Lyriss and Burnie showed me how important my pets are to me and have solidified the idea that I want to live at home during college and hopefully co-op. I also experienced first-hand how suddenly a life can be extinguished. It has made me more aware of spending time with my pets and my family, and it also made me realize that even when you lose someone, life will not stop for you. Even after the deaths of Burnie and Lyriss, I still had stuff I had to do. For example, I had classes until 8 PM that started three hours after I found Lyriss's body that I had to attend. (In the picture to the left, Burnie is the brown and white hedgehog and Lyriss is the white hedgehog).

​On a happier note, in terms of experiences that have impacted my professional trajectory, I also had the opportunity to participate in research during the spring semester through the Honor's program's Biomedical Research and Mentoring Program (RaMP). I had been interested in research since my early high school days, but I had not had the opportunity to participate in any research before. I ended up working under Xiaoxian An in Dr. Pixley's lab where I did a lot of image analysis. I mainly worked with different computer programs to analyze different images of tissue samples. The process was extremely repetitive. I would have to do the same step of the procedure for twenty to forty images, which could become frustrating at times. While I would become frustrated at points while I was actually working, as soon as I finished a step for a set of images or the entire project I was given, I became excited. I enjoyed what I did as a whole and this experience confirmed that I would like to continue to pursue research in the coming years.

​Based on my experiences this year, some of the goals I have for next year are to find a research co-op for spring semester where I can experience more sides of research and to become more aware when a pet or person becomes sick.

​In terms of research, I did not have much wet lab experience during the semester and I came in on the project after the animal experiment portion, so I know that I still have much to experience and learn about in terms of research. I hope that moving forward, I can find more research positions so that I can continue to expand my experience in the different components of research. One of my goals is to complete the ACCEND program and earn a Masters in Science which will require a thesis. Having as much experience with research as possible before my senior year will not only prepare me for the thesis, but also for the future I hope to have in research.

I still have one hedgehog and a chinchilla that I am personally responsible for besides the three dogs and one cat that my mom has. I really do not want a repeat of what happened with Burnie. I believe that Burnie had something else wrong with him besides the infection (he had hard lumps on his sides; I had pointed them out to the vet, but she was not really worried about them). I had not had many experiences with death before this year, so whenever someone became sick, I did not put too much thought into the likelihood of him or her dying. I think that is why I was not too worried about Burnie even though Lyriss had died just a few months before since I thought that it was unlikely that he would die so soon after Lyriss did. I cannot imagine a life without pets. I think Burnie and Lyriss have made me more aware that I cannot always brush off a sick person or pet. I think not brushing off a pet or person when they are sick will make me a better and more considerate person and pet owner.